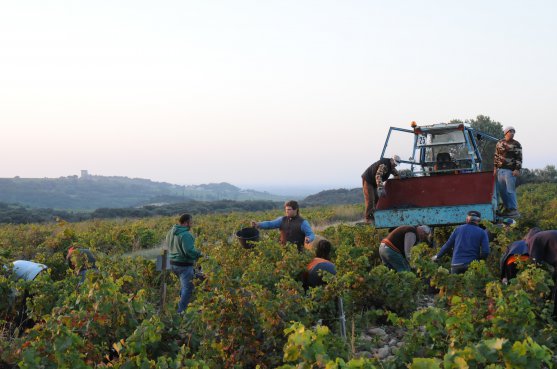 This vintage will undoubtedly be remembered for its exceptionally late harvest date.
We did indeed end up harvesting about 3 weeks later than in 2012 (end of September for the reds), which corresponded more to the production years during the mid 1970’s …

But late harvesting doesn’t mean lower quality – on the contrary!
The whole season was full of favourable signs for making quality wine: the spring, definitely cold but rainy, allowed the vines to irrigate well, therefore avoiding large water stress during the warm season. The September weather conditions were mild as we weren’t hit by big storms likely to damage the harvest. And the temperature average, lower than in past years, allowed for a slow ageing of the grapes and a progressive increase of alcohol by volume, contributing to interesting aromatic potential.
The main problem was mostly weak yields obtained in the Grenache-planted plots, where the coulure-phenomenon was rampant (when grapevine flowers don’t pollinate, therefore no berries, therefore less yield). Certain plot yields were therefore divided by two compared to last year.

So for this vintage we can expect some lively and aromatic white wines, which will most likely avoid the “pasty” aspect of some past vintages.
For the red wines, with its early-appearing phenolic ageing, we should be able to avoid the higher levels of past vintages which will create an undeniable advantage in terms of tasting pleasure.
But of course all this has to be confirmed in at least 18 months ...