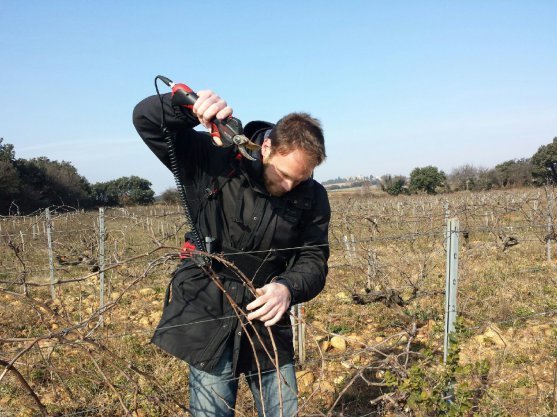 In wine-making, pruning is an essential phase as the yield and quality of the next harvest is wholly-dependant.

It’s also one of the most laborious steps as it’s done during the winter when the wines are dormant.

The pruning principle is easy, you have to “shorten” and “assemble”, with the objective being to limit as much as possible the sap moving between the vine stock and the future fruit-bearing buds.
Pruning is far from being an easy job, requiring precision and expertise. There are numerous factors which must be taken into consideration for quality pruning:

Nowadays, pruning remains a manual job, even if pruners are equipped with electric pruning shears, allowing you to prune up to 800 vine stocks per day (average density at Châteauneuf du Pape is 4000 vine stocks per hectare).

However mechanical pruning is becoming more frequent on certain plots where the yield and the production cost management are paramount, as mechanical pruning saves up to 50% of the entire pruning time (making about 15% of a wine’s production cost). This new pruning method nevertheless requires significant initial investments and a qualified driver so as not to damage the vines.

Furthermore, mechanical pruning does not allow for optimal crushing of the vine shoots (contribution of organic matter to the vines instead of chemical fertilizer) as opposed to manual pruners who gather all cut vine shoots into the middle of the rows.

The future years will most likely see the emergence of mechanical pruning on plots requiring high yields to be profitable and where the trellising has already been laid out for machine-managed harvests, and vines where yields must be controlled to produce vins de garde (wines fit for aging) which will remain being pruned manually.